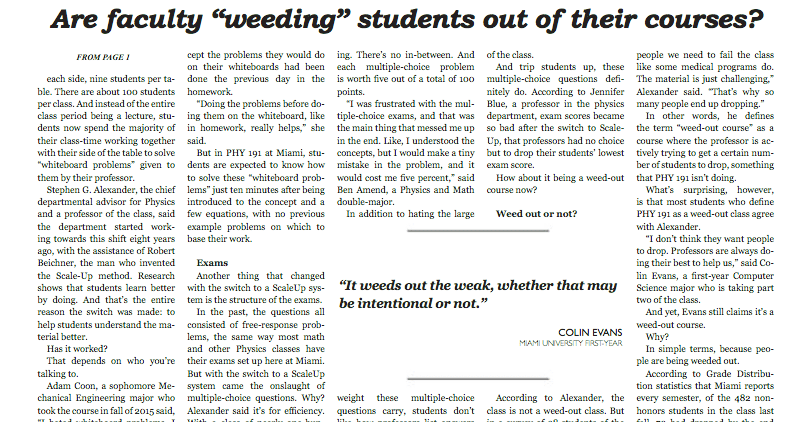 My first semester at Miami University, I was taking an introductory physics class. I had done physics in high school so coming into it, I was ready to tackle this class head on. It ended up being more tough than I expected. Not the concepts—I felt like I had those down—but the exams. And I wasn’t the only one who felt this way. Over the semester, a group chat of people in the class grew to over one-hundred members. Nearly all of them felt the same way I did: this class was unnecessarily difficult. The average of every single exam was an F, people were dropping like flies, and it’s not like we were stupid. So, what was the problem? I decided to do some investigative journalism into the matter.

I started out by talking with my professor. From him, I got a ton of background information on the class, why the exams were structured the way they were, and more. From there, I decided that I needed a focus for the article I was planning on writing. There were so many different directions I could pursue, but I could only pick one. I finally decided on writing about whether or not the course was a weed-out course. In gathering information for my article, I interviewed almost ten students who were either currently or previously enrolled in the class. From thoughts they had and my own, I created a survey that I sent out to students of the class to take. To fact-check and finalize some details, I interviewed my professor again as well as other faculty before finally sitting down and writing my piece.

The final article was over one-thousand words. It was published in The Miami Student, Miami University’s school newspaper. You can read it here.